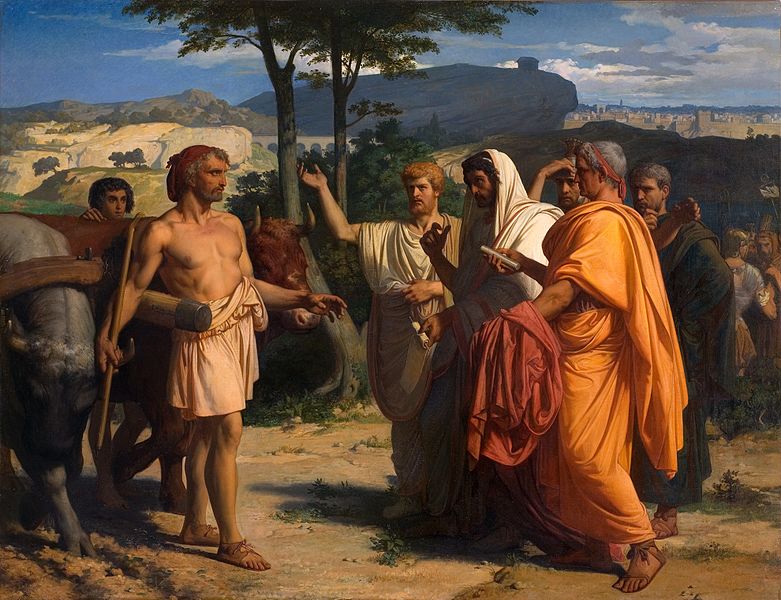 In 458 B.C.E., Lucius Quinctius Cincinnatus—at the request of high ranking officials—came out of retirement to rule as Roman dictator. The Aequians, who lived in the central Appennines of Italy, were fighting for their independence from Rome. The capital was in danger of losing control.

Because of unfortunate familial circumstances, Cincinnatus had been forced to live a humble life of farming. At Rome's request he immediately raised an army, conquered the Aequians, and then resigned his ruling post. His reign lasted sixteen days. Cincinnatus then returned to his farm to live a quiet life.

Or so he thought. Again, in 439, the retired statesman was asked to return to the consulship in order to quash a conspiracy to kill the king that, had the assassination been carried out, would have had devastating political consequences. As soon as the plot was destroyed, Cincinnatus once again retired to farming.

In each tenure, Cincinnatus held power only for as long as it took to save his republic. Not one day more. History has judged Cincinnatus to be the epitome of the benevolent dictator. That is, Cincinnatus ruled in order to serve the common good, rather than out of self-interest.

Few true benevolent dictators have existed throughout history. Many consider George Washington, the United States’ first president after the American Revolution, to be a benevolent dictator. Washington resigned his office after two four-year terms (he ran unopposed in 1789 and against John Adams in 1792), despite the fact that he certainly would have been re-elected, and probably re-elected again after that. Franklin Delano Roosevelt, who served four presidential terms during the Great Depression and World War II, has also been thought to have been a kind of benevolent dictator. (Being a benevolent dictator in a democracy, by the way, is not necessarily contradictory.)

Often the moniker of a benevolent dictator is bestowed not by the people, but rather is self-imposed by grandiose individuals. Today, the likes of Fidel Castro, Kim Jong-Il, Daniel Ortega, Hugo Chávez, and Muammar Gaddafi immediately come to mind. In these instances, the individual sees himself as the man “of the people, for the people”; yet the international community draws a different characterization. Whether the likes of Castro, Chávez, or Gaddafi has the support of their people, they never seem to convince most others (outsiders, foreigners) of their case.

Thanks to the Arab Spring uprisings across the Middle East and North Africa, the veneer of benevolent dictatorship is very quickly being wiped away. In Tunisia, Egypt, and Libya, Zine El Abidine Ben Ali, Hosni Mubarak, and Gaddafi, respectively, are gone, despite their own inclinations that their service was for the common good, rather than of self-interest. Similar leaderships are being very seriously challenged in Syria, Bahrain, and Yemen, and perhaps it is only a matter of time before the (benevolent) kingdoms of Saudi Arabia and Jordan are also tested.

In this day, when so many dictators are being assayed, if not outright toppled, is there room for another benevolent leader? Who would dare follow in the footsteps of Cincinnatus? Nelson Mandela seems the closest to a modern-day Cincinnatus: after having won his freedom and helped move South Africa toward reconciliation, he served just a single presidential term (1994-1999) before stepping down.

In Russia, Vladimir Putin appears keen to take the mantle. Yet recent demonstrations numbering in the tens of thousands in Moscow and across the vast country indicate that, unlike Cincinnatus, the people aren’t behind the man (much to Putin’s surprise, I think). In Burma, Nobel Peace Prize laureate Aung San Suu Kyi seems the next most eligible Cincinnatus: beloved by her countrymen (beyond measure), she is running for parliament and in all likelihood will eventually claim the presidency of the poor, South East Asian state. And just like Mandela (and unlike Putin), Suu Kyi has broad support in the international community.

Troubling, though, is the apparent threat that peacemongers pose to conservative (status quo) maniacs. Indeed, those whom citizens may support in a benevolent dictatorial role and who may also garner the backing of leaders worldwide never get the chance to lead. Mahatma Gandhi, for one, might have had a chance. Given racial tensions in the U.S., Dr. Martin Luther King, Jr. had less of a chance, but a chance nonetheless. And what about Benazir Bhutto in Pakistan? The problem, however, is that these potential benevolent leaders were taken down by assassins before they had the chance to wear the crown.

Media
A Parting Letter From the Editors

Border Crossings
Tensions and Security Operations Heat Up in Central…

Literature
The Art of the Ode
Tweets by @themantle